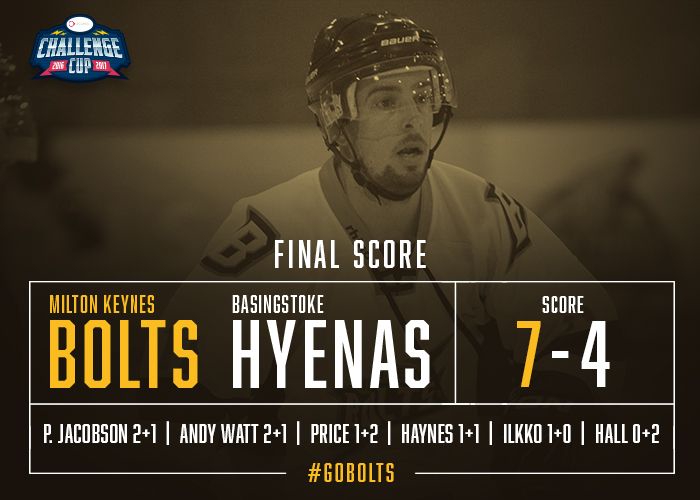 Milton Keynes Bolts got off to a winning start in The Access Group Challenge Cup taking the spoils 7-4 against the tough opposition of Basingstoke Hyenas.

Hyenas set the pace with an early goal, scored unassisted after a defensive mishap left the Hyenas Pennefather to calmly slot past Bolts netminder, David Cassidy at 6:09. It took Bolts just under two minutes to bring the score level at one a piece through Bolts Phil Jacobson with a short handed strike timed at 07:44. It was then Bolts turn to take the lead through a nicely placed shot pass straight to Andy Watt who deflected it past Joshua Gebbie In the Hyenas net at 13:00, slightly against the run of play. Hyenas continued to pressure the Bolts net and had their efforts pay off when they tied the game at 14:52 through Tom Holbrook. Despite some very good chances late on in the period the score remained the same taking the teams into the first intermission at two goals each, a very even period with Bolts edging the shots on goal 10 to 7.

The second started very much the same, nice flowing end to end hockey, in which both teams looked keen to take the lead. It was Bolts that eventually did on 28:04, with Phil Jacobson netting his second of the game and Bolts first of two quick fire powerplay goals, the second coming just minutes later at 30:20, this time Miika Ilkko adding from the blue line. Both teams continued to exchange blows but the netminders stood strong however Bolts fifth quickly followed at 32:58 this time Andy Watt adding to the goal he already had from the first period. Bolts held the three goal lead into the second break, leading the Hyenas five goals to two, a scoreline that told a story of a different game, as the Hyenas felt hard done by not to convert from the opportunities they had in the middle frame. The shots on goal advantage in the second going to Hyenas 21 to 15.

The final period matched the previous two with some great chances at both ends, again both netminders showing their worth in between the pipes. Two quick fire goals really made the game look harshly out of Hyenas reach, the first through Stuart Haynes at 47:46, quickly followed just seconds later by a strike from Paul Price at 48:48. The visiting team had different ideas as their heads failed to drop and they showed that they meant business as they forced some very good saves from the Bolts backstop. Hyenas efforts were finally rewarded with a couple of goals in the final eight minutes through Guy Davies at 52:05 and Matthew Byrom at 58:59.

With the scoring rounded off at 7-4, the Bolts pick up their first win of the competition taking all three points in a very closely fought game, somewhat closer than the score line suggests.

Bolts Ilkko and Hyenas Pennefather took home the man of the match beers, presented by a special guest as we welcomed Thor to Milton Keynes.

Bolts next game is on 20th January as we welcome Solent Wildcards to Planet Ice for a challenge game with the action facing off at 23:55.

There are no comments for this announcement.